Fingal's Cave is a sea cave on the island of Staffa, in the Inner Hebrides of Scotland, which is uninhabitated and known for its natural acoustics.

It is formed entirely from hexagonally jointed basalt columns, which are similar to the Giant's Causeway's (in northern Ireland).

The cave is named after the hero of an epic Poem by James Macpherson, and is supposed to have started building the giant's causeway between Ireland and Scotland. 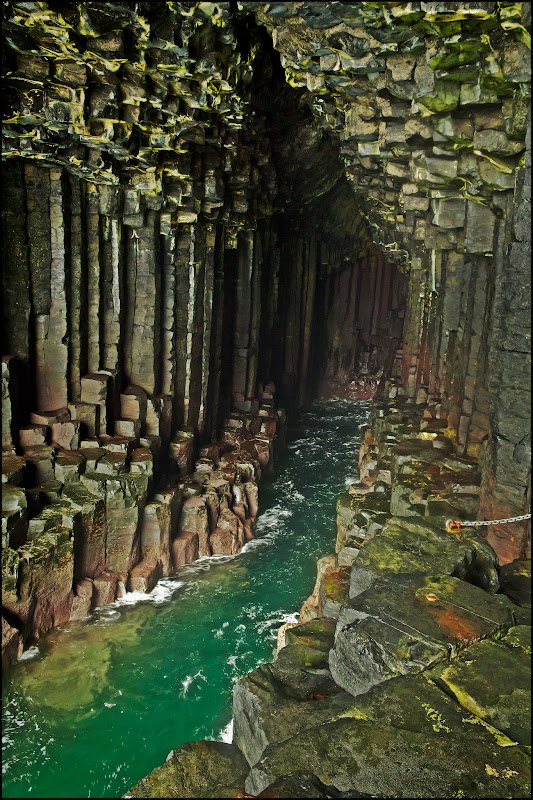 Our human relationship to caves has always been very dualistic: It was probably the first habitat where our ancestors took refuge, but it is also a place where one of our oldest enemy reigns quite undefeated: Darkness.

It is no wonder that our first instinct as a human when encountering a cave is to want to secure it, from wild animals, enemies, or even bad weather.

Does our survival instinct want us to purge that dark place? Is that the reason why dungeon delving is so popular?

The Island of Staffa, belonging to Scotland, is unsettled.

Is it because of the Cave?

What could live here?

My first association with this place was that it must be a troll's lair.

Probably a troll eating lots of fish, since there seem to be no source of mamals-meat in the vicinity...

But I imagine hardy settlers trying to conquer this island only to be gobbled by this ancient troll. Who amasses the belongings of the settlers in his cave... Which in turn brings more adventurers to his door.

A kind of antic "delivered food service", on a very unregular basis.

Those villains might even be of the lazy type:
Shipwreckers!

Everybody knows it's not safe to sail in sight of the desolated island of Staffa, but it is a much shorter route to reach Ireland, so audacious captains may try their luck to gain half a day of sea time (this is completly invented - just so you know).

Since the island is supposedly deserted, if a fake lighthouse at night seem to shine on the island, captains tend to think they have arrived in sight Little Colonsay and its quiet coves...

What happens next is a boat stranding on shoal, and a horde of pirate coming to finish of the crew.

The pirates then move their loot into the labyrith town made of cave complexes carved of the basalt.

A very old and interesting part of marine folklore, sea singers can be great enemies for a seafaring party. They don't have to be bad per se, though. But they also can be flesh-eating manipulative merfolks that look pleasant to the eye.

What happens if a PC falls in love with one of those "monsters"?

And what do you do with the offspring?

In any case, if there is treasure at Fingal's, king of the Sea-Elves, to be found, you'd better have a lot of potions of water breathing at the ready.

Door to another place

A cave can also be an entrance. It could lead to different kind of places:

Some of the ideas are taken from the article, other are new stubs to kickstart your imagination (if the picture was not enough)

If you need crazier results, roll a few D20 in order and make it the history of the place. Good luck tying up those lore tidbits together.

I hope this place has jogged up your imagination and that you will use it in one of your games.

If you do, i'd be glad if you could leave a comment to tell the adventure.