It has been a very loong while since i've posted any advancement on dread's universe development...

And surprisingly, I have no new text to show, but the progress I've made on a map, the map of the main human city, the lagune city of Neptoma (in the Lacuna Nepis)c.

It's still a work in progress, and there are errors that I will have to correct in post-production (with gimp), but I really like how it's getting somewhere (and how ideas for the setting come from developing the map and naming the places) 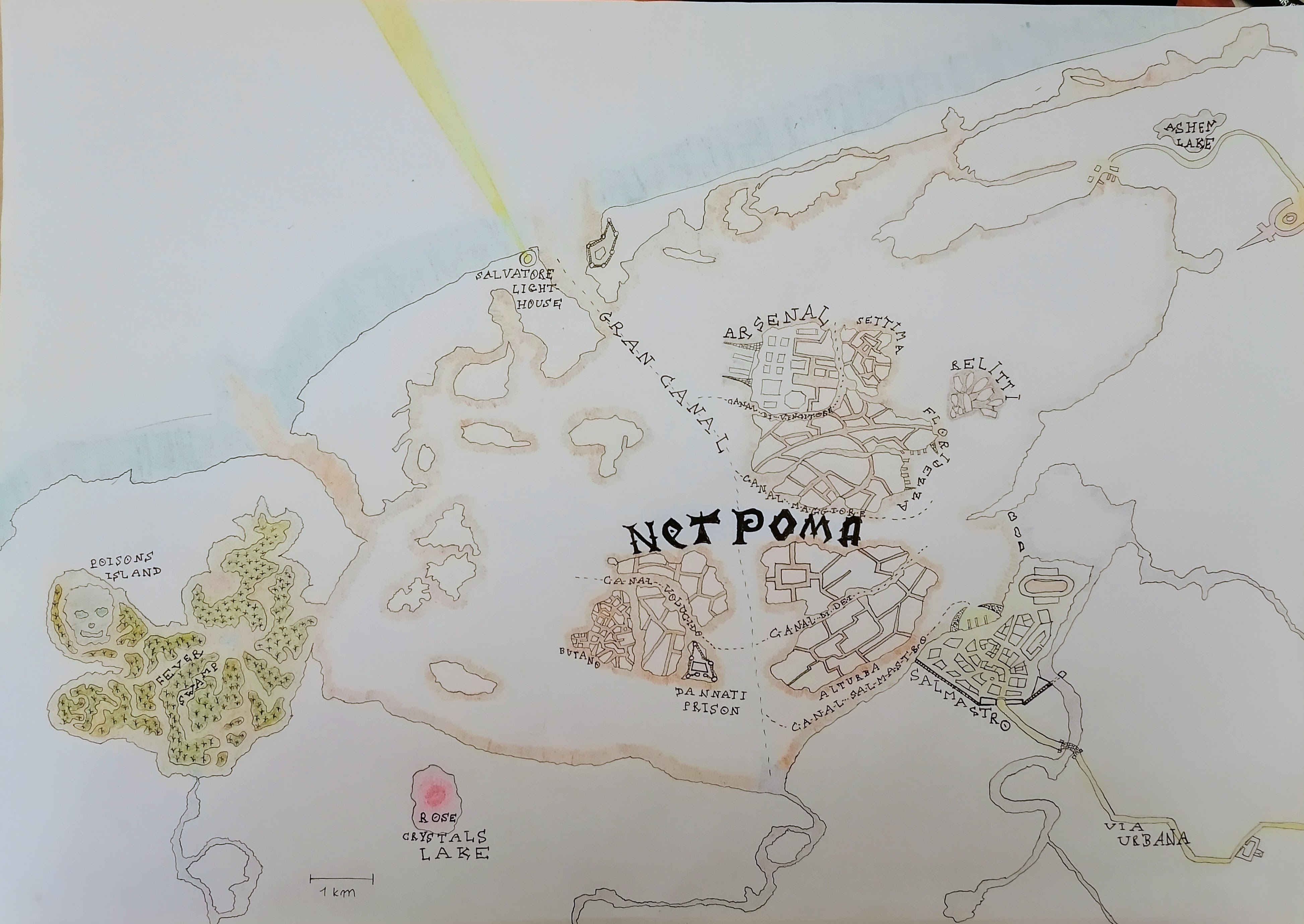 And because i've reworked on it, but it's worth not a new post, i'll give you here the new development: 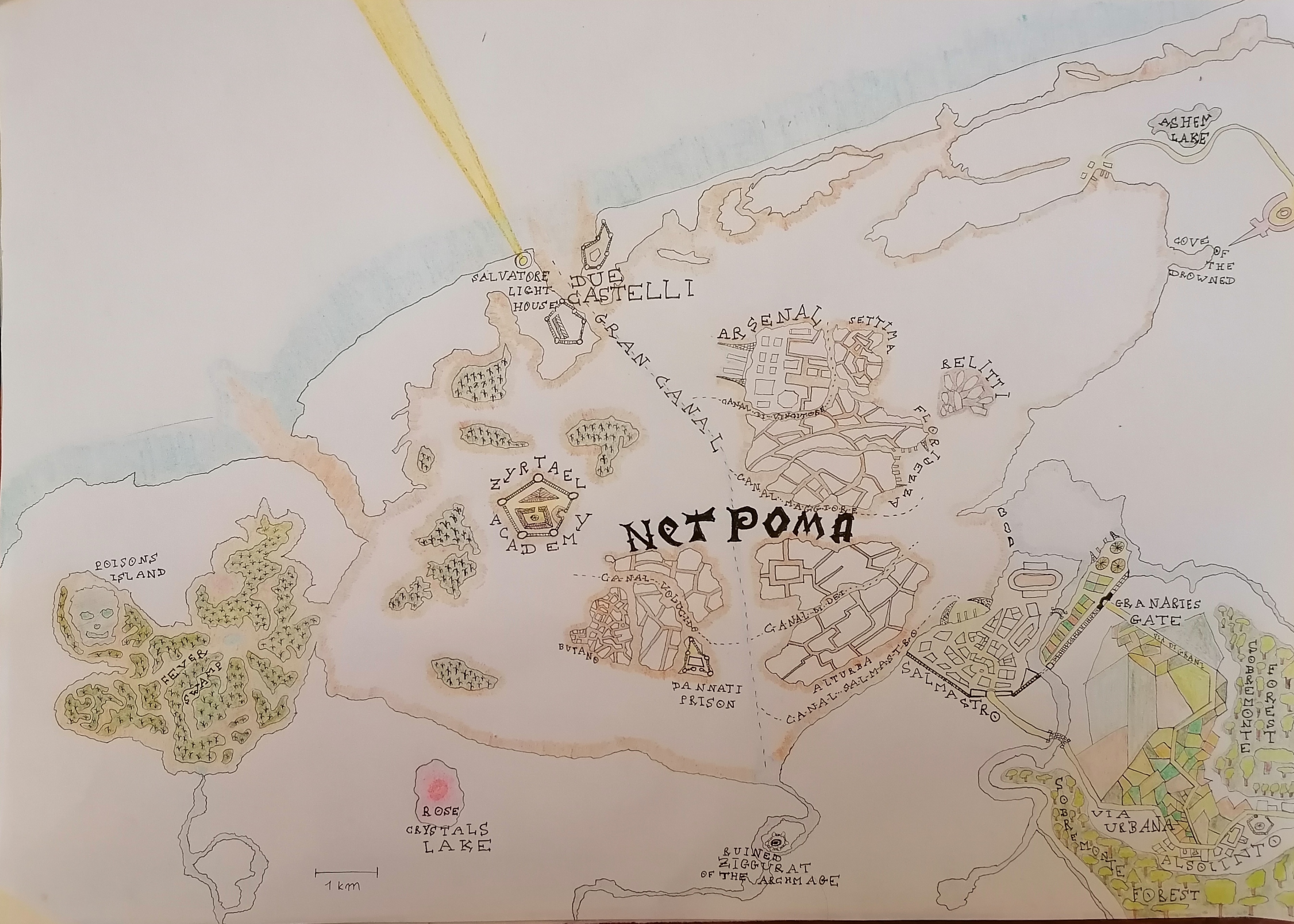 What was I expecting?

What did I find?

Also another point: Warpstar tries to give us an alternative to what WH40k RPG would have been, if it had been released with the philosophy behind WHFRPG 1E, back in the days. But there was no such book, the first WH40k books are much newer. So it's kind of funny to have a neoclone of something that did not exist back then. Still, it is believable and emulates the genre well, so i'd say, job done ! In my book, you are OSR and deserve that title (but I know that I'm lax with this terminology)

Would I recommend it, and to whom?

For those that have read Warlock!:

What I intend to do with Warpstar!

Other Articles you might find interesting on this blog:

Don't refrain from sharing your thoughts in the comments, I normally validate the comments quickly.
By Florent "Killerklown" Didier No comments:

As much as I hate AD&D2's ruleset and its inform bunch of heterogeneous rules (where there is no rules without an exception, or an interdiction to mix this and that), the settings developed by TSR back then have earned a lot of praise.

I have been for a long time a fan of the Birthright setting, but it is the only TSR setting that I have read.

I really started D&D with the 3rd edition and its lovely unified mechanics, and fell in love with Eberron, but was already done with the typical "vanilla fantasy", having had my cup of that in the end of the 90ies, in a long campaign where i had mixed modules for warhammer, D&D, stormbringer, basically any fantasy module i could get my hands on with my very limited funds (Magic was taxing my teenager purse, too).

4th Edition came and flopped, it was not my cup of tea either, but suddenly appeared this strange thing: The OSR movement. Even though I was not a fan of the older rulesets  (to be honest, because of AD&D2, I didn't really know them, and they are far better than I thought... But were not available unless in original and really pricey).

Curse of Strahd's success demonstrated the appetite of the gamers for the mythic settings and Print on Demand started to get really good...

Wizards was able to offer reprints of their old settings, not in the original box format, but at least in Hardcover and color. To a price that is much cheaper than what the boxes get traded for on the secondary market.

So it is possible to get those renown settings for a price that is actually under the price of a new setting. So, in January, I decided to close a gap in my RPG culture and order two of these mythical settings:
Planescape and Dark Sun. 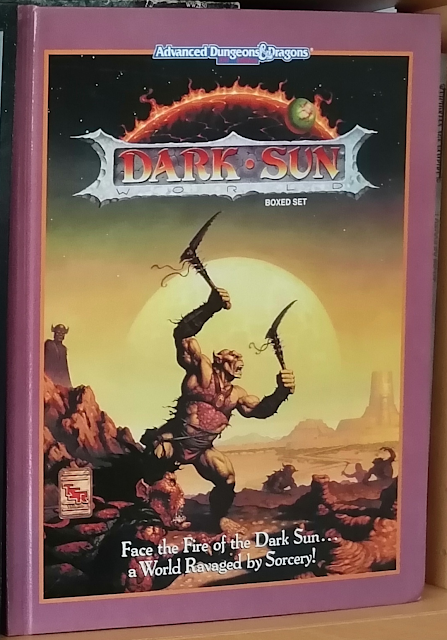 I thought that Planescape would be more something for me, but I have not yet been able to get deep enough in the book to find anything that tingles my sense of wonder and triggers my imagination (to be honest, i never liked alignments, which is a big deal in Planescape)

Having Dark Sun at home, it somehow fell on my "to read" staple and it surprisingly appealed to me, probably because it's clearly a post-apocalyptic fantasy world, and that's not very common. On top of it, it's a hard world, with really borderline subjects (survival at all cost and slavery)

I decided to do a review chapter by chapter, booklet by booklet (they are all printed one after the other in the reprint), mainly because most of what i liked can be found in one book and most of what i did not like in another

This is the part that i liked the least in all the boxed set. As I said, I don't like the AD&D2 ruleset. I had to force myself to read it through, but there were enough tidbits of the universe to make reading this part interesting. The "new take on races" praised on the cover was really kind of new. Not well written, but definitely new. I really hated how most races are untrusting towards other races, how elves are completely described as loners (good luck with your group, if you have someone playing an elf in the group, whose player wants to follow the guidelines of the rules book). It's not that it's badly written, but the game design behind the race creations is... Let's say outdated to stay polite.
I understand that in the early 90ies, they were only starting to introduce the "role" part of roleplaying into D&D, the whole "character centered" hype, induced by Vampire and the rest of the World of Darkness, had not yet happened, and there was not a lot of pre-existing theories or even books that had gone in that direction before. So that's why I say outdated instead of crappy. At least they were experimenting something different to get D&D out of the "dungeons only" style of play.

During this mysterious apocalypse, metal disappeared. Not completely, but metal is really scarce. The books tells you so like 8 times during the whole text of the boxed set. Still, that is a very interesting chapter, going over the alternatives to metal (for coins, they use ceramic instead of copper, which would be much more valuable, and all other metals and metallic objects cost a hundredfold - XP in measured in copper, instead of gold), but also describing a lot of the material needed to cross a desert.

A good chapter in my opinion, even though the AD&D stats were boring and the way "suboptimal" weapons (made from bone or obsidian) is just a -x to hit, which is also kind of lame. But it works...

Very interesting chapter too, presenting a very different magic system corresponding to new and modified magic classes. The setting is very well expressed through these differences in the way that magic works.
I wonder whether the Templar class would not be better emulated in 5E with a warlock reskin, bound to one of the sorcerer-kings, or as a fallen paladins.

Psionic abilities are also something difficult to emulate in 5E, but i'm sure the internet has already brewed a solution for this...

Not the most thrilling chapters to read if you're not gonna use the AD&D ruleset.
In a nutshell:

2 pages on how to use the classes as NPCs, particularly the druid and templars. Most of the information there is a repetition of what was said earlier, but one table listing duties of templars related to their level is really interesting.

Vision and light gives rules for fighting in a sand tempest. Forgettable. You'd be better off with a ruling than these rules.
Time and movement covers also the Athasian Calendar (some people love other calendars, this one is well done, at least), overland travel and vehicles, and dehydration.
The part on overland travel and vehicle brings a lot of information on the world and is really well made.
The rules on dehydration are hash, like really harsh, but well thought of to illustrate the importance of water in a desert setting.

New spells and modification to pre-existing spells, for example with spell that create water: They create much less.
Short chapter and interesting, even when not using AD&D

All in all, the most interesting part of the boxed set, but with its problems. Most of the stuff is really good but suffers from repetitions (quite a lot is described twice of thrice, if relevant to more than one chapter) and lacks in details, barely scratching the surface (liberty for the DM, my ass, there is nearly nothing playable without putting a lot of effort in developing around the described crumbs of setting).
The Atlas of the Tyr region was my favorite part, describing the city-states, but also all places where water can be found and where the interesting ruins are.
The metaplot is not described here, neither is any explication for the apocalypse.
The monsters that are described are interesting and illustrated (B&W and old school).
Actually, I should have spent more time of the review on this booklet, which is the real meat and really interesting, even with some slight defaults. This booklet makes me want to read more on Athas (which I will)

This booklet in a smaller format is in two parts. The pages were not scaled to the size of the book, so half of the surface (around the page itself) is just blank. That's a bit lazy on the part of the editor... I'm sure that scaling it to 90% of the page would have looked better without being to much troubles.

The booklet starts with a short story set in the world of Athas, which I found quite OK. It's entertaining and delivers the tone of the setting quite explicitly and relentlessly. You know Athas is dangerous after reading this.

After that, there is an introductory adventure in 2 parts, one for the DM, and one for the players with images to show them. The adventure is extremely directive and really bad written. Couldn't get myself to read it until the end, that's how bad it is. The player's part is cool too, and the images very evocative. So the author HAD TO MAKE SURE YOU'D HAVE TO USE THEM ALL. Therefore letting no room outside of his diktat of a scenario to do anything. Felt more like roll-playing than role-playing to me. To me this is by far the worst part of the box. I don't think that TSR kept this idea for other settings and i can understand why.

Review of the Print on Demand

I've bought a hardcover version of the boxed setting and it's quite good. The paper feels a bit cheap, but the colors are nice and the paper is thick. The ink does not stink. The binding is good. It's really a nive object and I'm happy to have bought it.
Only minus points are the maps, printed on 8 pages (but I did not expect that to be any other way) and the smaller folio that was kept in original size with immense margins.
I was really enthusiastic about the overall quality of the PoD books. Enough to order Spelljammer.

I've also bought the PoD of the 4th edition Dark Sun book, dreaming of a more detailed setting. I'll compare and tell you then