The world on which D.R.E.A.D. is based 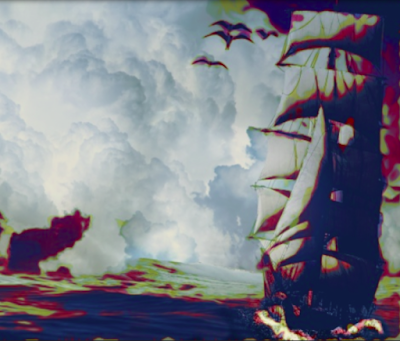 Once upon a time, in a plane far far away, humanity was losing a war against the Infinite Horde. The Kingdoms of the world of Panares had not been able to rally themselves against the Infinite Horde, at least not until the Conference of Urbarin, the Capital of the greatest human empire. Sadly, the attendants of the Conference could only come to one conclusion: That it was already too late to win this war, even if they were to fight with all their combined forces together. They had not listened to their experts and now it was too late. Having reached that consensus, Alamuna, a high Priest of the minor Goddess Uhrta, goddess of Famine and Sacrifice, stepped in front of the assembly and let her goddess incarnate herself in her body to speak directly to the delegates.
The gods too, had a summit. Their situation was precarious, too, since their believers were disappearing in this losing war. Their recommendation was quite relentless: since the Fight reaction did not work, their flock would have to flee, not only far away but out of reach of the Infinite Horde. The only place where the Infinite Horde could not grasp humanity easily would be another Plane of existence.
The method proposed by the god was extreme: They would bring 2 planes of existence to collide and tear a part Panares and paste it on the other plane of existence. The price would be high, too. Arin, the Patriarch of the gods, God of the sun, Reincarnations, Soul Transmigration and High Arbiter of the gods, would have to sacrifice himself and every 10th planar traveller.
This was seen as the last chance of humanity to survive and so it came to be.
Humanity from all around the inner sea moved onto Arkaion, the biggest island on the inner sea, and the Gods started the Severance.
The Severance was a catastrophe of planar scale for both concerned planes. The whole Island of Arkaion was wrenched out of Panares and dropped into the Valmerian Sea of what will be called by the human refugees "the Perfu Continent".
Gigantic waves broke out and devastated the coasts and their inland. Storms raged for months until the temperature and pressure differences compensated. Ley Lines were pulled, some even ripped, creating major Wyld Magic phenomenon (rains of frogs, random portal openings, meteor showers, volcanic eruptions, etc.)
The first year was bad for everyone, on the island and on the continent. Humanity decided to rename their Island and the continent around it Perfu, a word for Hope and rebirth in the language of the old Urbarian Imperium, that spanned around the complete inner sea.
The only spark of hope was that the old gods seemed to have survived and still were at the side of humanity.

Old Urbanian society structures were reused to organise life on the Perfu Island, and person of noble extraction were granted land on the island. Land was scarce, though, and a lot of nobles took to the seas to conquer lands on the continent or the other islands around Perfu. Those were easy targets for the Urbarian nobles, the devastation wrought by the Severance having weakened the locals.
New baronies, provinces and even states were created around the Valmerian Sea (as the locals call it). Caletria, the biggest city of the island formerly known as Arkaion (now Perfu), was renamed Neo-Urbarin, soon known only as Norbarin, the Enlightened city, capital of the human world.
Time passed, and humans carved themselves new kingdoms on the coasts of the Valmerian Sea.
They met new races, some friendly, a lot of others frankly hostile.
Contact was made with the long-living elves and the subterraneous Dwarves. A guerilla war against the halfling kingdom of Odovar was quickly lost and a reconciliation treaty was signed. A goblinoid invasion was stopped at the gates of Nidilarum.

We are now 250 Years after the Severance, and humanity is still alive, always trying to expand like a parasite, only slowed by the constant infighting between the rival powers.
The Continent of Perfu is still undiscovered and full of monsters.
Humans have brought technological advancement to their allies and discovered the rudiments of arcane architecture from the halflings, the base of alchemy from the elves and the lowest secrets of dwarven metallurgy (Steel).
Alchemy has proven very effective and potent and its wonders has kindled hope in the Perfuan civilisation, which started to intensely research this new science.

More on the world another time
By Florent "Killerklown" Didier No comments: 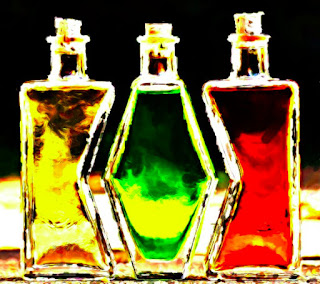 Statement on Game Design and Intention

D.R.E.A.D. is intended to test a few concepts less usual in D&D5 than your typical vanilla fantasy.

The 2 main test objects are following:

DREAD should be everything but flamboyant: (potent) magic is rare, civilisation is scarce and far between, monsters roam or rule the land.
Beasts are omnipresent and very strong, but those harnessing the monster’s innate capabilities can wield powers beyond imagination.
Heroes wander in mud, pay their heroic deeds with blood and scars and exchange their might for addiction.
This is a grim world, where fighting monsters is a way to greatness, cursed with its own burden.

While D&D5 doesn't implement gold as XP rules, it is easy to implement such rules. My point of view, though, is not that XP should be awarded on receiving gold, but on spending it. It then allows for a factoring of the conversion rate to steer the campaign in a certain direction (for a kingdom building campaign, you could have building cost on a x2 factor in the to-XP-conversion - A x2 factor on carousing would bring a more Conan-the-barbarianesque feel to the game, and so on).
I will develop my rules for factoring later on.

Why level 8, you will ask?
Well I tend to see the second tier of play (Levels 6-10) as the sweet spot for 5E gaming. Level 8 brings access to lvl4-spells to limited teleportation, but no resurrection or true teleport spells (like teleportation circle), but still allow for a second “feat or attribute”-choice.

What else to do but hunting Monsters?

Hunting monsters for their parts is a typical motivation in this setting. But what else is there to do, to ensure that adventures won't get boring and repetitive?
Well, there is plenty to do , without even leaving the “Monsters & Alchemy” trope:

The typical fantasy low-level missions go well in this setting:


On the Setting behind DREAD:

Humans are not wanted
In this setting, humans are refugees, coming from another plane, where their gods sacrificed themselves to allow them to exit a plane where they were loosing the war against forces of darkness.
On this new world, they are seen as parasites, aggressively carving themselves strongholds and fief or even conquering older "monstrous" settlements.

Only a few playable races
I decided to  build my universe around the traditional fantasy races and the monsters (sometimes organizing them in societies, kingdoms or even empires)
my playable races will be:

I might allow monstrous races to be played later on... Not sure about that yet...

That's all for now.
A lot of what is spoken of in this article will be further developped in a separate article
By Florent "Killerklown" Didier No comments: