25 years of my gaming history

25 years of my gaming history

The blogosphere (or at least some of the great people I'm following) have all started to speak of their old characters. Read slugs and silver's "30 years of gaming characters" or Throne of salt's "all my other characters"

Since it says a lot about your gaming history, I've decided to follow that trend and speak about my characters too.

But since I mainly was a DM all my life, i'll also speak of the campaigns I've led. 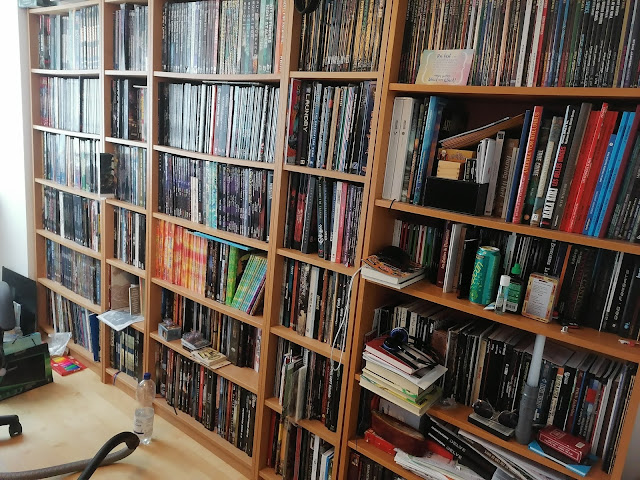 I discovered RPGs as an early teen age (13 y.o.) in the middle of the 90ies in a game club in the vicinity of my home town. It was half an hour of bus ride to get to afternoon of wonder.

I remember playing TORG as my first RPG and it was mind-blowing. I had read loads of game books (thx Steve Jackson & Ian Livingstone, and their translators) but the pace and the infinite openness of RPGs was an horizon widening discovery.

Sadly, a satanic scare about RPGs broke out in France, and my parents were not ready to let me go play with strangers.

Since no friend was ready to be a game master, and I was not allowed to play outside my home, I had to become a DM to be allowed to play. Took me a few years, to be honest...

My best friend was on a regular basis at the gaming club, but was happy to play with me after school. My little brother wanted to try (he probably played his 1st game with us at age 10 or 11). So the 3 of us began to play about thrice a week after school for 2-hours sessions.

We played a long campaign of fantasy with the BaSic system (a french porting of Call of Chtulhu for fantasy, leaning on stormbringer, but not as broken - %dice based). The second adventure had introduced a good dragon, that became the patron of the group.

We had fun. Lots of fun. And the amount of laughter coming out of my room at that time soothed my parents about the influence RPG-games were having on us.

The campaign was not really one, it was a succession of fantasy scenarios published in Casus Belli, THE reference rpg magazine (still to this day) in France. But the scenarios were not all for the same game, so I had to adapt stuff to fit them into my gaming world (we played scenarios for : AD&D, warhammer, Elric/Stormbringer, the BaSic system, and probably others i've forgotten)

In the end, I tired of that world, mainly because the characters had become really strong and I wasn't able to present them with decent challenges (I was dependant on published scenarios, completly unnable to write my own adventures, and high levels adventure are still a problem for me to this day).

Around 16 y.o. i started introducing my "Magic: the gathering"-crowd to RPGs, using the BaSic system in other published worlds (an X-files setting, a series-parodical cop setting [cops on roller-blades in California], a cloak and dagger setting).

And then came my first everlasting love: The D6-system and "Star Wars 2.5 revised and expanded".

From that point on, we played a lot in galaxy far far away, but alternating with the other stuff.

By then, my parents had started to accept RPG as an acceptable hobby, and a turning point came when i met an "old childhood friend" (apparently, we were buddies when we were 3 to 6 year s old) whose parents were colleagues of mine.

We were both into RPGs, and his parent's home was considered "safe territory" to mine. Soon, me and my best friend joined his gaming group of 3.

At last I was again a player !

We played mainly Mutant Chronicles, in a detective agency kind of way. My Character was filthy rich (due to an error of the DM, I had started the game with a social status of 12, when the scale actually went only up to 10), and started with 60 Millions brotherhood crowns, and earning money as the main focus of the campaign...

Let's say the character was problematic for the DM, even if I had been very cooperative (I wasn't in for the money but for the thrill), and soon had to die.

One of the other players was already creating his own games, which we played too.

2 years later, we all went to university, splitting the gaming group. My best friend and the game creator were studying in the same town, though and continued to play together, 1 on 1.

For my part, I moved to Germany and made an horrible GMing experience, due to my non-mastery of the language. So for the next few years, I'd only play when back in France with the 2 others that were also playing together.

I'd came in the summer and we'd play everyday (better said every night) for a month. There we played a few campaigns, and the game creator friend was the DM.

There was a campaign in the world of the "dark moon chronicles", where I played several Priests of the Light (they had a tendency to die quickly and I wanted to continue playing that character, so it was only kind of reseted).

They all had german sounding names.

We also played a very long "mafia bosses" campaign in the world of "Blade Runner" (the friend had literally expanded the universe with several binders of background).

My character was Jose Maria de la Suerte, a small time dealer that the next day was in charge of the whole weapon smuggling and illegal resale of weapons in California. The Cartel I was working for, was a mexican Cartel, organised as a family organisation.

I tried to run my part of the organigram as a business, was always broke, not completly ruthless, but very pragmatic [yes, I sold flame-throwers, grenade-launchers and war weapons to an apocalypse cult].

It was a lot of fun, and to this day "De La Suerte" is a famous character in our extended gaming group.

We also played a very long-running campaign of an urban fantasy game of that friend's development. Mainly based on werewolf's principle of Umbra and Wraith's principle of invading nothingness (or annihilation).

We played spirits that lived outside the material plane (behind the gauntlet in WoD terms), but could interact on earth when possessing a host.

There were 22 Clans, each based on one of the major Tarot arcanas. I had randomly pulled a "Hierophant" character, who was an expert in the magic of pacts and metaphysical links (that were needed to control a body on earth).

This game was heavily based on esoterism and we learned a lot about this. From Kabbalah to chinese spirits, there is a lot of obstruse arcane knowledge to learn.

The campaign was a search for orbs that could control Dragons (asshole-y ultra powerful creature of the Ether) and went on for at least 5 summers.

My character lost a bunch of human hosts, but always made it, even if often it was just "nearly made it".

We had a lot very intense moments and we always hope we'll continue playing that campaign, but the GM lost nearly all his sparce notes when he definetly moved out of his parent's.

After a few years living in Germany, a guy moved in in our student co-living flat. And he was an RPG enthusiast. And a DM.

Soon, 3 guys from the flat and a few from outside were playing after I re-tried to lead a game in German. Which worked much easier with 5 years of living in germany and playing with germans than with only one year of german residency and playing with erasmus exchange students.

I ran a few Mutant Chronicles games that were quite borderline (adult stuff included - violence, sexuality - Stuff I wouldn't play without an X-card nowdays) and the other guy started a round of the Dark Eye.

And I remember fondly my character, a priest of the commerce god (also god of thieves), which i played like a priest of turbo capitalism, pushing everyone in the direction of making a quick buck, as long as their were paying their tithe. To me.

I even had started to write the Character's story as an epic poem. It's still somewhere on my google docs.

This was renewal in my RPG practice... Suddenly I had realized I could play in German. And lead games. And introduce new people to the hobby. Which was arduous in a language university with 90% ladies that were very seldom geeky...

But it was a restart.

Then came the clone wars and after binge-watching a few seasons, I decided to tinker the old D6 system and DM a jedi-only Clone wars campaign.

It took a while, my jedis found the trail of a mega-laser in construction by the separatist and did all they could to get their hands on the technology, but also not to have it fall in Palpatine's hand (they had had a precognition that the mega-laser design would one day blow Alderaan to pieces). Players knew, even if their characters were only suspecting Palpatine to be a Baddie™.

This is one of the few campaigns that i did bring to an end and I'm extremly proud of a few really nice moments in this campaign (best moment for me as a DM: Playing Jabba and his protocol droid - babling something in Huttese and interpreting it to the characters was really funny)

I even had developped Achievments™ for the campaign, like you find some in video games... (click the link to watch them. They are in German, though)

That's the time I started writing RPGs in response to creation contests in short periods. Like 3 weeks to write an RPG. I could not find the time any more nowadays, but i loved it and the emulation around the community of creators all in the same boat...

After 15 years in the town I studied, seeing generations of students coming and going, i moved myself to the next town to avoid an hour of commuting.

And then I was, again, without a group.

There were Magic players at work, I soon introduced them to RPG, first with shatterzone, then with a D6 adaptation of Birthright, where we played a loooong campaign.

Then came D&D5, and they loved it (i had gifted the starter set to one of the new players that was interested in DMing).

They started playing without me (they were flatmate and I was not always available on short notice). They were also students, for the most part, and had much more free time that I did.

One day, I just left the group, unable to keep up with their gaming rhythm without alienating my GF.

But before that i had played a few interesting characters, one rogue particularly comes to mind, who was very good at speaking with others and had created a company of mercenaries around our group, and died a few time, assassinated in his sleep, betrayed by an NPC. RIP Hjalmar !

And then there was an half-orc fighter playing dumb, but considering himself a Poet. His gimmick was that he tried to ride all the most dangerous creatures we fought. There was even a (young and week from malnutrition) dragon, he rode.

Since then, I've reduced my amount of gaming rounds from twice a week to once a month.

And I love it too. I hope I'll find time to playtest all my projects, in the future.

And publish a game, at last !

Email ThisBlogThis!Share to TwitterShare to FacebookShare to Pinterest
Labels: about me, news