Staying in the "desert mood", I want to present you the second largest cave on earth, the Majlis al-Jinn.

It means the "gathering place of the Djinns". How could we leave out this place 😊? 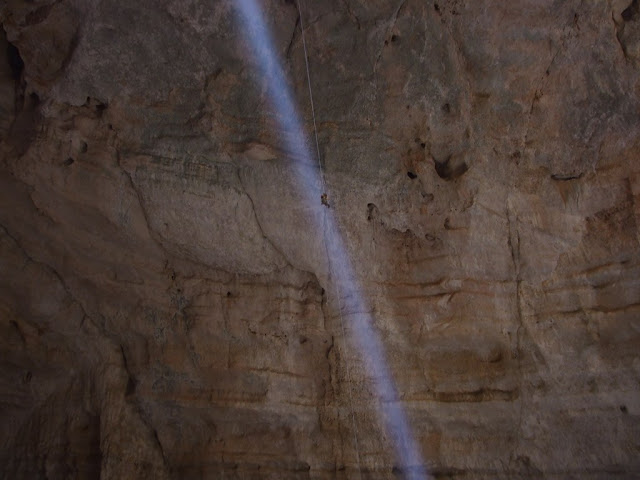 This gigantic cave under the plateaus of the Oman desert is a single chamber measuring about 310 metres by 225 metres (over 6 soccer fields of base surface!)

It actually looks like 3 black holes in the ground, nowhere anybody sane would like to get it (unless a loved one was falling down)

The smallest hole is about 2 meters wide, while the biggest (on the middle of the image) could easily swallow 3 cars at the same time...

From the top, it's difficult to make anything out in the cave, 120 m further down

Once inside, it's another matter completely: The sun comes through the 3 holes, in fierce rays of light...

There the ambient light is in the yellow tones, because of the reflection on the walls and floor.
All sort of animal bones litter the ground under the holes, these having not survived the 120 m drop.
You can see on the photo how small humans are in comparison, one is under the left ray of light.

After a heavy storm, some water can be found in the cave... If the climate outside was more temperate (or at least rainy), this cave could be an extremely big water reservoir or underground lake. No hole leads out, but one might exist, caved in under tons of rubble, allowing excess water to seep through.

In most Arabic legends, free Djinns live in this kind of gigantic caverns.
It is easy to imagine that a magic force has created these caves, because of their majesty, eerie size, and awe-inspiring proportions.

Typically, Djinns grant wishes, but for a price, and often interpret the wish in the worst way possible. Only the craziest and most desperate persons would seek their help.

1D12 reasons to seek a Djinn

Desperate times call for desperate measures. If you want your player characters to meet a Djinn, you need to prepare them for the encounter:

What could the Djinn want from you

A Djinn will not give you three wishes, only in Disney does that kind of thing happen...
Not only will the Djinn try to corrupt your wish with a technicality, he will want from you something in return. Something you'd prefer never to lose.

What else could the cave be?

If you're not into Djinns & Efreets, the cave could also be: