Writing a game is more akin to a marathon than a sprint. Once the enthusiasm of the first days fades, it's not easy to sit down and write what's already developed.

How to keep the flow going?

It is always helpful to run your game parallel to developing it, to keep it on you mind and seeing problems before you wrote them down.
In the case of Europol-X, I've run about 5 sessions with a group of 2 friends, and the introduction of a 3rd player was the kick I needed to end writing the character creation tables.
Since they have received experience, I also was obliged to create the XP system, based on feats. Those are now being developed and written down (this is my next step in the book dev).

So what has been done?

Well I'm happy that, apart from corrections, the careers of the system are fully written down and illustrated. This is maybe not a cornerstone of the system, but the D10 "PAST PROBLEM THAT COULD COME TO HAUNT YOU"-tables are a big help in introducing side-problems and flavor to the game

Well I actually try to do layout and writing simultaneously, because both steps don't seem to be a chore if I can do the other one, once I'm bored with the first... It also helps showing nice results before the product is final.
Sure, one could argue that someone might steal the stuff, but what I share is only pictures, and normally, not all the stuff is available. Certainly, one could steal my stuff, but I can't imagine someone giving that much fucks about the game to redo the work from my originally posted stuff as images. You could surely produce something as nice and personal in the same time. I expect the game to be pirated after it is available on Drivethru, not before 😄

Anyway, what I wanted is to show you how the careers look like, as of now (I've already spotted things to correct) 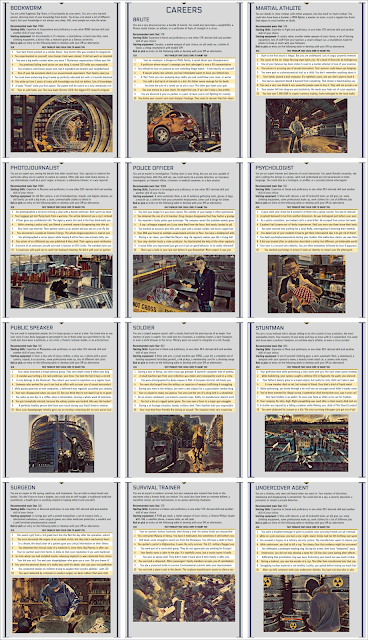