Prompt 3 of laketober probably is the on that inspired me the most, but also may have a longer lasting influence.

The prompts were Voodoo and Tarot, and that last one is what got my creative juice flowing:

I decided to interpret the "high Priest" card of the tarot as a voodoo Priest, on the job of creating / enchanting a doll.

I'm not really happy with the sky, but I love the colors!

Here is "The HighPriest working on a doll" 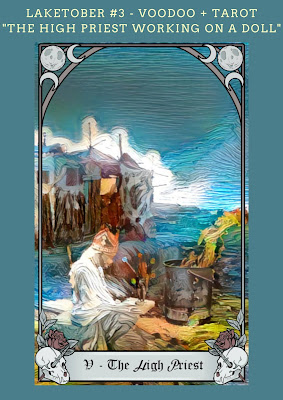 Since I couldn't find an appropriate "hanged by feet" image to incorporate, i decided... ...to let a friend make a photo of me in the right position.

I'm really happy about this one, because it's a complicated piece (much more than I normally do) with 6 parts put togehter but is still homogeneous and  the colors are well balanced (in my opinion).

This one was difficult: I had no real inspiration (nothing inspiring, to be exact) and not a lot of time on my hands (real life is getting in the way)

I had to take those on a timer, in my kitchen and quite frankly mostly blindly. The focus was also not on the depth i was myself so I actually need to be proud of the result, considering everything that was against me...

But I'm not really proud of this one... Only proud that it exists, which is still much better than not delivering an image...

This lack of proudness is one of the reason I gave it the name of an unexisting arcana - so i don't have to include it into the Tarot at the end of the month if I really don't like it...

Post you instagrams, twitters and artstations in the comments !