“Blood Moon Rising” by Small Niche Games is not part of AEG’s "Adventure I", from which I have been mostly reviewing modules up to now. “Blood Moon Rising” is a Labyrinth Lord module for 3-6 characters of 1st-3rd level. Actually 8-10 total party levels, which is a good indicator, I think. 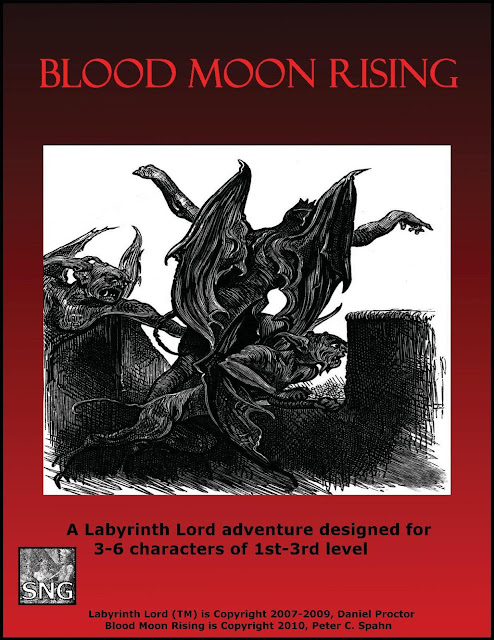 You might get severely spoiled by this review. Consider yourself warned!
“Pleasure is often spoiled by describing it.” - Stendhal.

What is it and where do I find it:

This is Module for Labyrinth Lord (LL), an OSR based on D&D B/X by Moldvay/Cook.
It is available on drivethrurpg.com as a pdf and as an A4 Print on Demand book (bundle possible)
Blood-Moon-Rising

Since I am not really fluent in LL stats, i’m not really able to say. But it looks easy enough, because no encounter has to be a combat situation. I suppose that it can be quite lethal for murder-hobos, but there is plenty of room for sleep and “avoid danger”-behaviour.
If I was gonna run it with 5E, I'd adjust the difficulty to my party during the conversion and re-creation of stat-blocks. A friend who has run the module with 5E argues that it works best with level 1 characters, though...

This is a “timeline” module. Events happen, players can influence their outcome and bring the story forward or ignore everything and face the consequences. This not really linear and let’s a lot of place for the DM to improvise and add his own spice...

Motivation for the PCs to resolve the module:

I think curiosity and friendship made in the village / at the fair will be the main reasons to go investigate what’s happening. Being a good-doer is helpful for this module.

If you ask me, the cartography is the biggest misstep of this module. Not only do I find it ugly as a hag, I tend not to understand the lay of the land from it. The village map is okay-ish, because the village and the fair are mapped as expected, but the surroundings and the topography around the village is either missing or not readable on the map (is it a river, is it cliff, is it a hill, who knows?)
The dungeon called “The tomb of St Garan” is clear, to be fair, but since it’s only 3 rooms, how hard would it be? Still, I probably would recreate the maps from the text, which is, at the other end of the scope, very clear and descriptive.

Apart from the cover, there is not a lot of art. We have a medieval sword fight illustration and an illustration of the night demons (who look very much like gargoyles). The Gargoyles illustration is also the cover and the medieval sword fight illustration is not referenced, leading me to believe that it’s extracted from a real medieval codex and is therefore in the public domain (and don’t get me wrong, I find this practise very good, but the academic asshole inside of me wants the reference). On the other hand, I don’t think that it needs more art: the text is descriptive enough to spark the imagination. This point is not something I’d give the module bad shit for. It’s not great art, sure, but it’s really unnecessary thanks to the text quality, so what’s the big deal? I’m content with what I got.

There is one big twist in this module: the Saint adored by the village was not the good guy they think, and is actually one of the main opponents of the module.
It’s central to the module, well done and fun. I really liked this part

I really liked this module. Sure, there are small things I did not like, but mainly I found it really good and fun. Enough that I want to convert it to 5E and run it afterwards (which means creating a new group and explaining 5E to most of them, too, so it’s not a trivial task).


What would I change before running the module:


What adaptations would I make to run this module in DREAD’s World::


How would you rate the module?

I'd give it 4.5 stars out of five.
It would need better cartography to reach the 5 Stars.
But, as it is, it’s definitely worth the 5$ asked for the pdf.

Would you recommend it?

Yes, I would and I actually intend to run this module, once I get to modify as written above. I think I would not send the characters as level onem though, but for their 2nd/3rd adventure, sent by their patron to bring a donation to the monastery in exchange of the blessing of a weapon of the patron.

The drivethru-links included in this article are affiliate-links.
One day, I will have a few dollars credit on Drivethru and I'll buy indie products with the price tag "Pay What You Want" (PWYW) that I have found very useful. So somehow this is supporting indie creation, right?

Edit/Addendum:
There is a very useful  resource on drivethrurpg written by the Dndspeak community:
D100 Activities at the Faire
(you can find it also directly on their blog)
By Florent "Killerklown" Didier